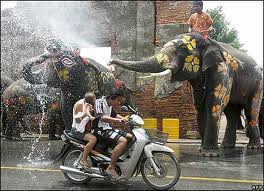 So if you happen to be staying in Samui Island Villas for the Thai New Year national holiday, from April 13th – 15th, get yourself some water bombs, or a little water spraygun, dress in some very old (or waterproof) clothes – and enter into the fun of the world famous Songkran Water Festival – sometimes known as the No-Holds-Barred Thai Water Fight!

This is Koh Samui’s hottest time of the year, and to be sprayed with water will come as a definite relief to most and can be enjoyed just for that fact, but let’s look at where it all began, and why.

It was probably the Burmese who introduced this celebration of the traditional New Year into the north of the country, adapting it from the Hindu festival of Holi: the Spring Festival. This was a time to get together with your family, to pay your respects to your elders, enjoy some serious feasting, to help prepare the home for the coming New Year and to wash the Buddhas and other sacred items in their homes and temples.  The water that had been poured over the Buddhas was thought of as ‘blessed water’, and the local people used it to pour it onto members of their family to give them good luck for the coming year.   Young people took this a step further during the celebrations and started throwing water over strangers to help relieve the heat.

The spiritual and religious aspects of this festival – washing the bad away, respect for one’s elders – as with many festivals in the Christian calendar, have been somewhat overtaken by the fun aspect of throwing water onto complete strangers – and getting doused in return.

If you do wish to join in – and you may not be able to avoid it – please be careful who you throw your water at: best stick with those who are on foot and trying to throw it at you!

This is also a time in Thailand when there are beauty pageants for the young Thai women to take part in, and for lots of birds and fish to be set free.   Phra Pradaeng on the island of Phuket has a colourful parade just before the mass release of birds and fish, the first of which is set free by the winner of the Miss Songkran beauty competition.

Chiang Mai is a good place for some water-based extreme fun, with Bangkok coming in rather quieter, as many local Bangkokians will have taken to the hills …  And don’t think that you will stay dry on Koh Samui, because you won’t.  The island has its own colourful, noisy, all-embracing water celebrations, pageants and water fights.  So don’t go away, stay put, dress down – and have a lot of very wet fun.