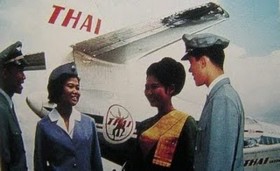 Thai Airways (THAI) celebrated its 50th birthday in 2010, and on 1st April this year it finalised 40 years of a service to Sydney, Australia, its first international destination inaugurated in 1971. The airline now operates 18 flights a week between Bangkok and Sydney, and 14 to Melbourne. There are also daily flights to Brisbane and Perth.

Not bad for an airline that started life in 1960 as a joint venture between Thai Airways Company and the Scandinavian Airlines System, or SAS. By 1977, after 17 years of partnership, the Thai government bought up the remaining SAS holding, and THAI became fully owned by the Thai people. By 1987 expatriate staff based in Thailand numbered less than 1%, and Thai nationals had long assumed full managerial and operational responsibility.

Starting locally within Asia, nine destinations were opened during its first year of operation in the Asia region, followed in 1971 by flights to Australia, then to Europe in 1972, and in 1980 to North America.

From its major airport of Suvarnabhumi in Bangkok, opened in September 2006, THAI now flies passengers to 11 local Thai destinations including Koh Samui, and a total of 71 in 35 other countries around the globe, using a fleet of 90 craft. Split virtually equally, THAI operates both Airbus and Boeing planes: Airbus 300, 330 and 340; Boeing 737, 747 and 777. THAI was the first Asia-Pacific airline to fly into London Heathrow.  Only until recently has THAI had any financial problems, posting a profit for many consecutive years, but recently global events may have put a temporary dint in that happy situation.

THAI has been voted for years as one of the best luxury airlines in the world, offering amazingly friendly service, and restaurant-class cuisine, wines and champagnes. Its mission statement, sabai, meaning healthy mind and body, is one that all THAI staff take very seriously indeed.