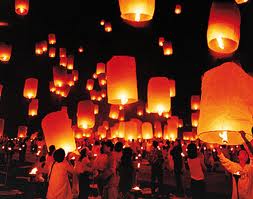 Travel is only glamorous in retrospect. (Paul Theroux)

Travel is enlightening, mind-expanding, astonishing – and one of the very few pleasures of life most of us can now enjoy, whatever our means, in any month of the year.   Because travel can be from your hometown, your home county, your home country; it can be a few miles down the road, or halfway across the globe …  but let’s not sit still for the rest of our lives, in front of that flickering electronic box or the computer, let’s get out there and see it all for ourselves.

Welcome to Samui Island Villas blog!   And we wish you all a very happy, healthy and safe 2011 on your travels.

For Thais, the western New Year’s Day is celebrated and is a public holiday.   The New Year that Thailand has just welcomed is in fact year 2554: there is a 543-year difference between the Gregorian and the Buddhist calendar.

But one of the biggest New Year celebrations in Thailand is the Chinese New Year: approximately six million Thais have a Chinese heritage.  In 2011 it begins on 3rd February and brings in the Year of the Rabbit, the fourth animal in the Chinese zodiac.  The festivities are loud and colourful – a must-see if you are here then.  “Wan Trut Chin” is Thai for the Chinese New Year.  The festivities will last for several days and include food offerings to gods and ancestors, and lots of noisy firecrackers and drumming parades and processions in the streets.

Bangkok’s Chinatown on Yaowarat Road will be the venue for one of the largest of the Thai celebrations, but ask about them wherever you stay in Thailand.   For example, in Nakhon Sawan Province, where the festival has taken place since ancient times, the festivities are renowned, with many hugely colourful and noisy events, such as the dragon, goddess and angel processions, and large colourful bamboo, paper and silk lions and dragons parading through the streets.

The tradition is thought to have begun when a beast called the Nian – sometimes depicted as a rather muscular lion / ox hybrid – used to visit a certain village on New Year’s Day to eat up anything edible and unguarded – especially children!  The villagers put food offerings outside their houses in the hope that it would be satisfied and go away.   Once, it was seen that the beast was afraid of a little child wearing red, so to add to their defences, red lanterns and scrolls were hung at their windows and doors, and as it was also sensitive to loud noises, firecrackers were let off and drums were banged loudly to frighten the Nian away.   It was so scared that it was not seen in the village again … but it is still said to be living somewhere …

There are many other old traditions concerning the Chinese New Year –

The entire house should be cleaned before New Year’s Day, but on New Year’s Eve, put all the brooms and brushes away, as you might be sweeping away your good fortune.   And at midnight, leave all the doors and windows of your house open to allow the old year to leave.   And of course, never, never borrow or lend anything on New Year’s Day!